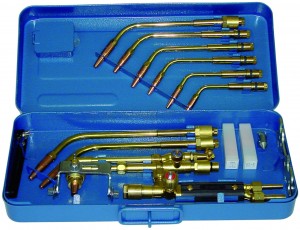 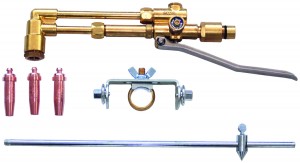 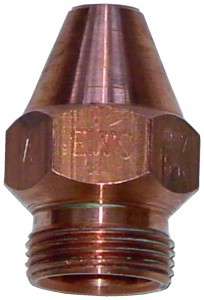 Set for heating (welding is not possible with the burnable gas propane) and cutting in steel storage case.

Hand Grip analogical to the one for acetylene, merely propane thread with plug for propane hose 4 mm.

Heating Torch work after the suction- or injector-principle and are largely immune from sustained backfire. They are generally operated with an oxygen pressure of 2,5 bar, propane pressure about 0,5 bar. Gradation and consumptions see table.

Cutting Torch with Concentric Nozzle are suitable for all cutting applications up to maximal 300 mm. They work after the suction- or injector-principle and are largely immune from sustained backfire. Wing operated cutting oxygen valve. Also included in delivery are nozzles for a cutting range of 3-100 mm and as accessory guide roller,circular guide and wrench. The propane pressure is about 0,5 bar. Oxygen pressure and consumptions see cutting nozzles and instruction manual.

Cutting Torch with Block Nozzle can be used for all cutting applications up to 200 mm. Advantage of block nozzles: flame cone is longer, bigger distance of nozzles mouth to workpiece is reducing to risk of jam, higher cutting speed, gas saving. Cutting oxygen valve by operation with wing or lever. Largely immune from sustained backfire by working with suction-injection principle. The acetylene pressure is about 0,5 bar. Oxygene pressure and consumption see cutting nozzles or instruction manual.

Heating Nozzle (also called copper points) for heating torches model 116.21 to 116.28 vary except in the size of the orifice of the nozzles also in the connection thread respectively diameter per size of the shank of the corresponding welding torch (metallic sealing).

Concentric Nozzle for combined cutting torches are centrically arranged whereby one heating nozzle (jacket) one or more cutting nozzles are assigned to.